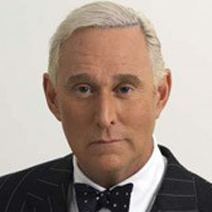 Roger Stone is the author of the New York Times bestseller The Man Who Killed Kennedy: The Case Against LBJ. He is a legendary political operative who served as a senior campaign aide to Richard Nixon, Ronald Reagan, and Senator Bob Dole. Stone would parlay being the youngest staff member of the Committee to Re-Elect the President in 1972 into being a conduit of secret memos from Ex-President Nixon to President Ronald Reagan throughout the 80s.

A veteran of eight national presidential campaigns, Stone would spend hours talking politics with Nixon as confidant and adviser in his post-presidential years. Stone is known for his hardball tactics, deep opposition research, biting candor, and love of English custom tailoring. Stone serves as mens’ fashion correspondent for the Daily Caller.” He is probably the most controversial speaker on the political horizon today, an insider who was there from the beginning, who doesn’t want Nixon blamed for what happened on Nov. 22, 1963.